A direct vote referendum is scheduled for the November 2022 ballot in Massachusetts tied to dental insurance reform. Voters will decide whether or not to set the medical loss ratio (MLR) for dental plans at 83% and require the insurer to refund any excess premium to its covered individuals and groups.

Many public interest groups in various states have attempted to reform the dental insurance industry.

More often than not, bills have been killed or introduced in legislative committee because of the powerful dental insurance lobby.

This particular effort, launched in Massachusetts by the Committee on Dental Insurance Quality (CDIQ), aims to expand patient benefits and reduce costs by speaking directly to voters.

Voters will decide whether or not to set the medical loss ratio (MLR) for dental plans at 83% and require the insurer to refund any excess premium to its covered individuals and groups.

A CDIQ administrator, Mouhab Z. Rizkallah, DDS, MSD in an exclusive interview for dentistry today stressed the importance of circumventing the legislative process, which is too often undermined by special interest groups. He advocates taking things directly to citizens via a ballot initiative.

“We (the CDIQ) were expecting support from the Massachusetts Dental Society (MDS) and the American Dental Association (ADA). In their endorsement, they wrote “we are also realistic that the November ballot measure is finally a chance to achieve the change needed.” Their use of the word “finally” is correct, because MLR legislative bills always fail, in every state, because of the powerful dental insurance lobby. Our dental MLR vote is the first of its kind, and it bypasses the insurance lobby. We hope to win with this new approach.

Rizkallah added, “To understand the tangible impact of our ballot’s 83% MLR requirement, one need only look at the most recent Form 990 from Delta Dental of Massachusetts. commissions, payments to affiliates and gifts to their parent company in a single year. We have compiled this into a table for all to see. 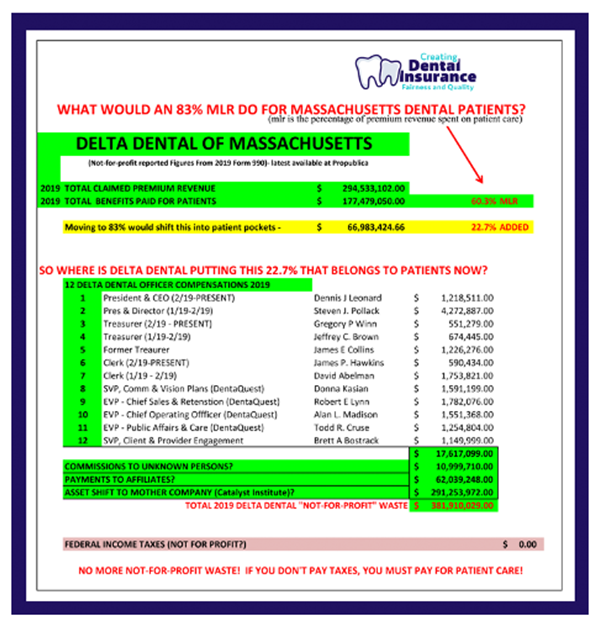 ***Table reprinted with permission from the Committee on Dental Insurance Quality.***

“It shows that Delta Dental of Massachusetts only spent 60% on patient care, when medical insurers in that state are required to have an MLR of 88%.

“Patients shouldn’t have to fight to be healthy, and so corporate waste will stop with our dental vote initiative,” Rizkallah added.

Rizkallah felt that the significance of this referendum will not only impact citizens of the Commonwealth of Massachusetts, but also dental patients nationwide.

“In November, we will advocate for patients statewide and install MLR dental insurance for the first time nationwide. And since our vote also requires strong income/expense reporting by insurance companies, our new law will feed the other 49 states with critical insurance data, so that every state can adopt a dental MLR and can likewise transfer 23% additional funds toward patient care. , instead of funding greedy “non-profit” companies. Our vote will impact hundreds of millions of patients.

Robert E. Chavez, DDS (also a CDIQ member) offered to support Rizkallah’s efforts: “As past president of the Massachusetts Association of Orthodontists, I feel I can speak on behalf of dentists and specialists from across the state of Massachusetts. Dr Mouhab Rizkallah is a leader like no other I have ever seen. Despite being brutally attacked by the insurance industry over the past decade, Dr. Rizkallah has been a tireless advocate and hero for tens of thousands of children in need.

“His work with the dental vote now makes him a bonafide national hero in the defense of dental patients. No one is his match. Chavez concluded.

In long-term support for this referendum on dental insurance reform, Jill A. Tanzi, DDS a director with the Massachusetts Dentistry Alliance (MDA), has a long history of patient advocacy. The MDA faced fee reduction proposals by Delta Dental of Massachusetts in meetings with the Commonwealth Insurance Division.

The MDA has advocated for the rights of patients to obtain the services of out-of-network insurance dental providers. The MDA has also generated a framework to help alleviate the shortage of dental assistants in the workplace caused by the COVID pandemic.

Tanzi said of the current voter initiative, “MDA is thrilled that MDS and the ADA are supporting the dental vote issue in Massachusetts. We need all dentists and dental organizations to support this initiative which will force dental plans to do more for patients.

The Massachusetts Dental Society (MDS) released a statement strongly supportive of the Referendum on dental insurance reform in November.

The MDS also expressed frustration about past efforts with dental insurance reforms. “Several other states have already enacted laws requiring dental insurers to file annual MLR reports. California is one such state. Using data from these reports, the California Dental Association found that state dental plans average an MLR of 76%, significantly lower than medical plan rates.

“For years, the MDS has worked to reform MLR legislation. As we continue to work with lawmakers and dental insurance providers to find common ground, we are also realistic that the November ballot measure is finally a chance to achieve needed change. Like medical patients, dental patients deserve to have their premiums spent on patient care.

“We are pleased that the Massachusetts Supreme Court has approved the November referendum to reform dental insurance medical loss ratios (MLRs). The Massachusetts Dental Society endorses this measure to ensure that, just like medical patients, dental patient premiums are spent on their care, with key components ensuring transparency and accountability. This election measure continues to gain traction and support, and we are confident that voters will approve it in November. »

Michael A. Graham, The ADA’s senior vice president for government and public affairs was asked directly about the value of approaching voters directly through a referendum, versus the legislative process.

“Both tracks are viable. Whatever path this type of reform takes, there is still much to be done to protect patients from the abuse and waste of dental insurance premiums. This initiative is a step in the right direction to give more power where it belongs, with patients.

“It is very encouraging to see growing interest in applying a claims ratio to dental plans in legislatures across the country, with new MLR reporting legislation being enacted in Maine in 2022. We look forward to working with the Massachusetts Dental Society and other dental care. associations across the country on this patient-centered reform using the path that works best in the state.

Graham was also asked about the likelihood of federal legislation, if the voter referendum passes in Massachusetts and eventually becomes a national model.

“Absolutely. For too long, dental plans have avoided patient protections like medical loss ratio (MLR) that are routinely applied to major medical coverages. Again, whether through the legislature or By ballot measure, the ADA supports dental benefits that pay a high percentage of the premium collected for patient care.

(Note: Delta Dental of Massachusetts has been contacted for comment. No response has been received at the time of publication.)

Dr. Davis practices general dentistry in Santa Fe, NM. He assists as an expert witness in dental fraud and malpractice legal cases. He currently chairs the Santa Fe District Dental Society Peer Review Committee and is a member of the state dental association with its house of delegates. He writes extensively and lectures on related topics.

He can be contacted at [email protected] or smilesofsantafe.com.